Replacing Tea with the Wilderness

Replacing Tea with the Wilderness 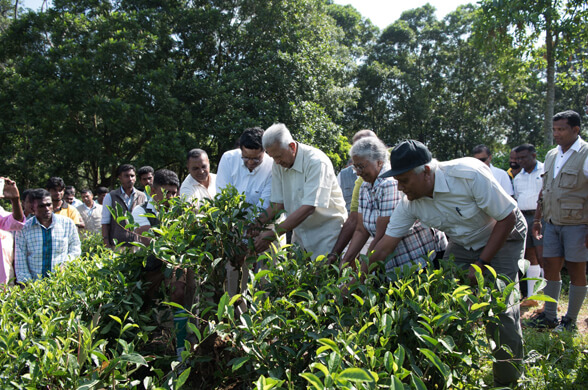 On the 30th anniversary of Dilmah, Founder Merrill J. Fernando uprooted the first tea plant at Dilmah’s Endana tea garden to create a nature corridor linking Delwala Kanda and Walankanda Forest Reserves. The initiative connects a three-kilometer-long gap between the two forests which had been separated by tea plantations and human settlements for the past 100 years.

The nature corridor linking Walankanda and Delwala Kanda is the second biological corridor that will be created by Dilmah Conservation at Endana with the support of the Forest Department of Sri Lanka, under the supervision of specialists Prof. Nimal Gunatilleke and Prof. Savithri Gunatilleke. A nature corridor is an area which connects two fragmented ecosystems and facilitates the dispersal and migration of its floral and faunal populations. This linking of forest habitats thus enhances the genetic flow and species richness of these ecosystems while lowering their chances of extinction. Delwala Kanda and Walankanda in the Nivithigala Divisional Secretariat of the Ratnapura District are separated by the tea plantations of the Endana Estate- a 635-acre tea plantation set up during the British Colonial period in 1915.

The Delwalakanda- Walankanda patch, an area within the Sinharaja Cluster, with nearly 28% endemic floral species and a rich repository of fauna is identified as a region of high biodiversity. Previously, Dilmah Conservation had been instrumental in establishing a biological corridor linking Pita Kanda and Valan Kanda regions where local communities helped in planting nearly 2000 indigenous forest trees which are found in the wet zone of Sri Lanka. Both these ventures by Dilmah Conservation are intended towards securing natural habitats and enhancing the biodiversity and conservation value of the tea estates which display unique ecosystems that change gradually in relation to the changing elevations.